Ronald Meeuwissen Posted on March 28, 2014 Posted in Politics and Airsoft, Uncategorized No Comments 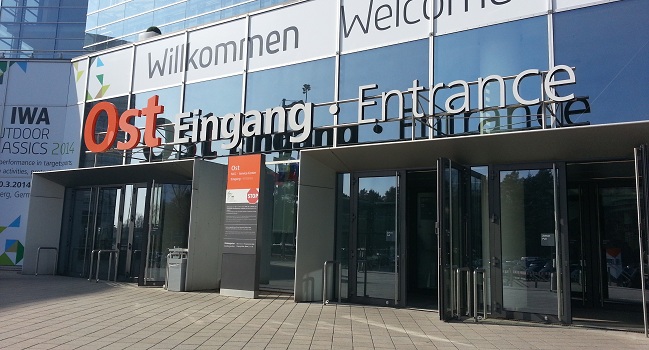 My name is Richard Lewis, a British Expat living in Croatia and a keen airsoft player since 2010! Yeah, just over 3 years yet already helping to head up an important project for European Airsoft! I currently balance this role with my presidency of my local airsoft club ASK Fenix while at the same time conveniently representing Croatia’s national airsoft association HASS as a member state of the EAA. My additional role inside the EAA is as its PR manager responsible for the website, forum and social media pages (Facebook and Twitter). It was this role that gave me the fortunate opportunity to travel to this year’s Airsoft Meetup – hosted by NLAirsoft.com and PopularAirsoft.com.

I was asked to provide an update on the situation with the EAA and present it at the Airsoft Meetup held in the Hong Kong room of the MESSE Zentrum Nürnberg which held a strong crowd of Airsoft manufacturers and retailers including WE Europe, RedWolf Airsoft and Gunfire among others. Right from the outset I can say I liked a lot of what I heard! But more about that later…

Arrival at the Fair

The security team managed the streams of attendees with ease, turning away non trade visitors… One such poor soul had traveled all the way from the Czech Republic only to be told that he cannot enter the event. That made us a little nervous after our 7 hour drive and the initial problems we had ourselves while trying to gain access considering we were not technically Press and not trade visitors!

Ok, 3 hours later we finally got permission to enter the event, just on time for the meetup to begin!

Starting some 10 minutes later then expected we began with a presentation from Mr. Chu of Redwolf Airsoft followed by Gunfire, Airsoft Innovations, WE Tech Europe, Krytac, ASG, ICS, then my own speech which then followed on with Modify Tech. This rounded off the talks for the event which then finished with the Popular Airsoft Awards ceremony.

During the event we also watched a video presented by Mr. Michael Belousov from the BorderWar series of milsim events.

My take on the meetup was positive. The highlights of the show that caught my attention were less about the latest available or in-development models and more about the technological advances that are soon to help bring positive changes to how we play!

Airsoft innovations – Mr Chris Punnet and Carlton Chong demonstrated a new mechanism for airsoft shotguns that effectively fires around 16 rounds simultaneously to imitate a realistic spray of shots. This system promises to allow super fast reloading without any catching or cutting of the BBs when they’re being chambered. Their demonstration was successful and interesting to watch and they added that whether shooting a single BB or 16, the muzzle velocity is exactly the same. Again, a great improvement over current mechanisms. At the end the pair called for support from manufacturers who would be willing to build this great new mechanism into a shotgun body and I wish them the best of luck with that!

Redwolf Airsoft’s Paul Cho introduced a new line of ABS plastic BBs that have been engineered to compress on impact as opposed to shatter and crumble. The advantage of these are said to be for the safety of players, especially those who wear wire-mesh face masks or goggles and face the risk of small BB fragments transferring through. We managed to get our hands on a pack of .30g ABS BBs from Redwolf, don’t miss our review coming soon

Paul also introduced a new line of Gas for the GBB market which boasts a slower cool-down time which allows the weapon to fire longer with more consistent FPS before needing to stop because the gas became too cold to use. We didn’t get a sample of this yet but watch this space…

There were a few other speeches about up-and-coming products but those were more about realism of the feel of the weapons and new weapon designs which although good, they will not be changing the dynamics of the game in quite the same way as what I have outlined above.

Any active airsoft player can tell you the fundamentals of airsoft weapons because the core mechanisms have not had a dramatic transformation since their inception and sure, if it ain’t broke, don’t fix it! But, what players want out of airsoft is an ever changing trend which is focusing more on the realism from a functional perspective; calling for better accuracy at greater distances with stronger internal parts. What I have seen doesn’t directly indicate that manufacturers are keeping up but it seems that these facts are on their radar. The next couple of years should be very interesting!

To read the speech in full, please click here.

To summarize what was said, the speech was intended to let airsofters in Europe know what’s happening inside the EAA and where we are heading. The idea of the EAA has always been to be a unified voice for European airsoft, based on decisions voted for by the national airsoft associations within each European nation. As simple as this sounds, there are logistical difficulties to tackle. For example our meetings have to be scheduled at a time convenient for several time zones, and we have to be mindful of differing levels of English speaking ability. With personal lives and varying working commitments, freeing up time to work on our hobby is difficult, and we know that the people running national associations already have allot on their plate.

Unfortunately we do need a certain time commitment from each association, or the EAA project will not grow further, and right now it does need to expand. The final point of the speech asks that people get involved and help build that momentum at this critical moment, which will firmly place our flag as the representative for European airsoft. We are calling for financial support from people with a vested interest in the airsoft world to help pay running costs and secure money for campaigns to highlight the EAA within Europe.

The EAA still requires an individual to act as the treasurer, who will research and ultimately secure EU Grants for the association, which will then be available to support airsoft projects around the EU. Please contact Matt (via contacts tab) if you are interested in this role.

Now that the Meetup was over, our intentions were to head over to as many of the stands available and talk with the teams and look for more innovations. This is a pretty tough task when you find yourself walking past the real steel weapon manufacturers, all with impressive spreads of their product lines!

Our first port of call was the WE Europe stand where we discussed with them their GBB line and the gases they have been working on to power them. We managed to grab a sample of their green gas which we were told would perform 8 times better than standard green gas formulas. The second of three products was another type of gas that promises to be even stronger than the first! When asked if this was bordering on the power provided from red gas, the answer was “no” so we are looking at something 8 times better than green gas but less powerful than red. To fully understand what that means we will have to wait and get our hands on a bottle. The 3rd of the group was a cold weather gas which due to its unique filling method provides a gas that works even at the height of winter! The specifics of temperature range are not yet available to me but I will keep my ear open. I was however warned that this would not be suitable for use in summer as it would be too powerful.

Our next stop was BBKing who were out to promote their re-vamped BB products. We were shocked at this point to find one of the primary products on offer here that we had hoped to find or at least heavily discuss with manufacturers on what’s actually going on! … white heavy BBs… .36g, .40g and .43g all in white! Any sniper or DMR will tell you how tough it is to find light coloured heavy BBs, let alone find them with a good finish and without bubbles. We made it our duty to collect sample packets of these, as well as their standard weighted bio BBs and tracers. (since this time, we have tested the BBs with great results and have arranged a few thousand bbs for additional testing. once we have reviewed these we will put it up on here.

After BBKing, we made our way to gunfire where we were looking over their product lines. It was nice to see the TAG (Tactical Game Innovation) hand grenades and 40mm grenades on display with open views of the internals. From what i have seen of these on their YouTube video, it will prove to be a very effective weapon in game. Talking with the team we also learned of more .43 heavy white BBs that are currently in prototype stage and set for release around June. We were unable to take some of these to try but we gave it our best shot. As a compromise, we took their standard weight BBs for testing… all in all, their products look very well made, good job.

With our hands full of various marketing materials we left the event happy and forgiving the 3 hour ordeal we went through to be granted access. It’s time to start planning next year’s trip! 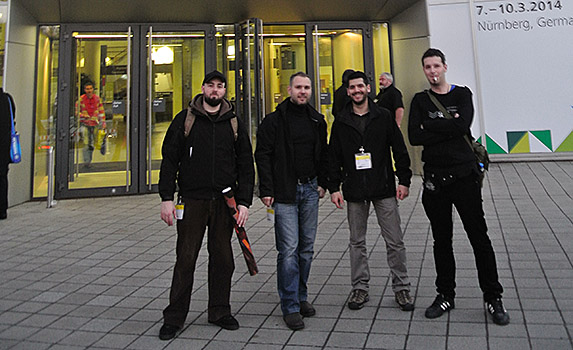 Where do we go from here?

It’s time now to follow up with the people we met at the meet-up and work on ways to get the EAA working at full capacity in the shortest period possible. This starts with all of you who read this. We need your help to bring everyone together. Like, share and comment on our social media pages and show the world we are one group supporting a common cause.

EAA Board Member. Into Airsoft since 2002.

This site uses Akismet to reduce spam. Learn how your comment data is processed.